Learning disability and dementia: hard to reach or under-researched?

The term, ‘hard to reach groups’ is often heard in health and social care research conjuring up images of insurmountable barriers, and populations who are somehow tantalisingly inaccessible to the researcher. Yet, we have no difficulty in using terms such as person-centred, relation-centred or meaningful activities, recognising the importance of each when it comes to support needs and care planning with individuals.

So how do we match the person for whom we have very little evidence of their needs and preferences, with appropriate support that claims to address just that? Surely it is time to change the focus and acknowledge that ‘hard to reach’ groups are actually ‘under-researched’ and that, as researchers, we need to take some responsibility for this?

In 2016, I was part of the Dementia and Equalities group led by the NHS Health Scotland and Alzheimer Scotland.  This focused on five particular population groups with characteristics protected by the Equality Act 2010, where a range of challenges might arise in the context of dementia: 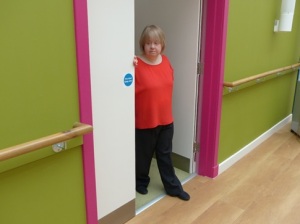 We know that such groups are under-represented in terms of the numbers of people diagnosed with dementia, and current services do not fit specific needs. Yet, without knowledge of the specific characteristics of such populations, the cycle of under representation will continue with a subsequent lack of evidence-based support in practice.

For example, we know that at least 1 in 3 people who have Down’s syndrome are estimated to have a type of dementia by the time they reach mid-50s. This leaves the potential for a period of ageing with increasing cognitive impairment whilst not ‘fitting’ into older persons or dementia care services which are typically for people aged over 65, or into learning disability services where the long-term focus in the UK is commendably on independence and self-determination.

Recent media coverage has focused on areas of dementia care that are becoming more evidence in care homes, day centres and hospitals across Scotland – sporting reminiscence, doll therapy, assistive technology or telecare are just a few examples. Whilst much evidence was originally anecdotal, research and evaluation have followed with a steadily growing evidence base for non-drug interventions. Even where we live with dementia has received attention – who knew fifteen years ago that colour contrast and the design of a room could be so important in supporting people with dementia to make sense of their environment? Yet this growing evidence of non-drug interventions has not included people with a learning disability and dementia. 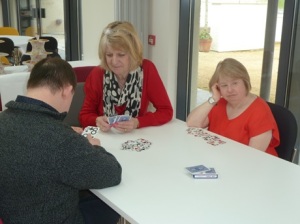 My current research is a three-year project funded by the Alzheimer’s Society, one of two national implementation grants funded in the UK, and the only one in Scotland. Along with Dr Kate Mattheys, Research Fellow, and a team of co-researchers and advisors including people with a learning disability, we will conduct a participatory action research study in two cycles. The aim is to implement non-drug interventions with people who have a learning disability and dementia. The first cycle will include participants with a recent diagnosis of dementia, whilst cycle 2 will focus on people with advanced dementia.

Taking a collaborative approach and including co-researchers with a learning disability, we hope to challenge the notion of ‘hard to reach’ groups in research and instead demonstrate that participatory and inclusive research can open doors that are otherwise firmly shut for individuals who are typically not invited to take part.

Under-researched populations such as people with a learning disability and dementia are not hard to reach; it is up to us to enable and facilitate inclusion in research using appropriate, and where necessary, adapted research and communication methods. Without this, the cycle of under-representation will continue with a subsequent lack of evidence-based support in practice.

By stirlinghealthsciences in Dementia, Learning Disability on April 19, 2017.
← A Stop Smoking in Schools Trial: A process evaluation of the implementation of ASSIST in Scotland Male Nurses Today – why men should choose a career in Nursing →